NEW FREEDOM, Pa.—William J. Solomon, VMD, was 2016’s second leading stallion owner, and that was without any foals of one of his outstanding stallions, Lord Shanakill, racing in this country in 2016.

Lord Shanakill, who has two crops of racing age running in Europe, arrived at Solomon’s Pin Oak Lane Farm from the Irish National Stud in January, 2016. 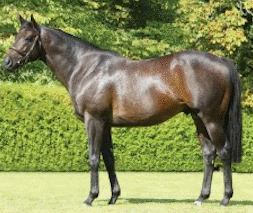 Lord Shanakill at Pin Oak Lane FarmHe is the sire of four stakes performers, three group/graded, from two crops of racing age and ranked second among Europe’s freshman sires by number of winners in 2014, with 16 worldwide.

His runners have amassed more than $1 million and include 2015 stakes performers My Dream Boat, winner of the Prix Perth-G3 in France; Great Dancer (Ire), third in the Hill Prince Stakes-G3 at Belmont Park; and Mister Brightside (Ire), second in Santa Anita’s Twilight Derby-G2 in his only U.S. start.

With earnings of over $800,000 and multiple graded wins, My Dream Boat moves to the elite class of international racing and put Lord Shanakill in the top tier of Mid-Atlantic sires.

“He was a extremely fast horse,” said Dr. Solomon. “He was just a whisker short of being the champion 2-year-old in Europe. His owners felt that with the speed he carries he would be a good fit for American racing.”

“He’s a Speightstown Group 1 winner,” said Dr. Solomon. “Plus he has an outstanding pedigree for both the grass and the dirt. I think he’ll be a great fit.”

Lord Shanakill won the Group 1 Prix Jean Prat in France at 3 going one mile. At 2, he made eight starts in England and France and hit the board seven times, five in group company, with a victory in the six-furlong Mill Reef Stakes-G2 at Newbury, and Group 1 placings when second, by a nose, to Intense Focus in the Dewhurst Stakes at Newmarket and third in the Prix Morny at Deauville.

He concluded his career at age 4 with back-to-back seven-furlong stakes scores in England, culminating with the Group 2 Lennox Stakes at Goodwood.

In his 18-start career he won five times and placed in seven others, for earnings of $910,021, and counted additional Group 1 third-place finishes in the Lockinge Stakes behind champion Paco Boy (Ire) and St. James’s Palace Stakes to champion Mastercraftsman (Ire).

Lord Shanakill is out of the Theatrical (Ire) mare Green Room, a half-sister to G1 winner Spanish Fern and to the dam of G1 Santa Anita Handicap winner and millionaire Heatseeker (Ire).

Lord Shanakill remains the property of the Irish National Stud syndicate and will stand for 2017 for $4,000 live foal.

TWO NEW stallions have moved into Pennsylvania, one at Northview PA in Peach Bottom, Pa., and one at Diamond B Farm in Mohrville, Pa.

Uncle Lino set a record in winning the California Chrome Stakes at Los Alamitos when, leading at every call, he finished the 1 1/16 mile race is 1:40.82.

He was second to Mor Spirit in the G3 Robert B. Lewis Stakes and third in the G1 Santa Anita Derby to Exaggerator and Mor Spirit.

He is out of the Orientate mare Haysee, a full sister to G1 Alabama Stakes winner Lady Joanne and a half-sister to classic winner Shackleford.

Peace and Justice, the only son of War Front to stand in Pennsylvania, won three times from eight starts and will stand at Diamond B for $3,500.

Peace and Justice won first time out in a maiden race at Belmont Park in October,, 2013 and then twice in allowance races at Santa Anita in 2914 and finished second in an allowance race at Mountaineer in 2015.

He is out of the Smart Strike mare Strike the Sky.