Songbird sells for $9.5 million, Md.-bred For Royalty sells for $2.1 million 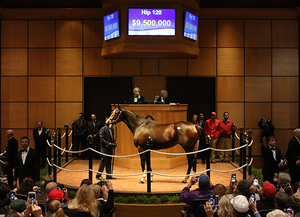 Hip 120, Songbird Songbird was bought by Mandy Pope, who in 2012 also purchased Horse of the Year Havre de Grace, by Saint Liam, from Porter, for $10 million at the Fasig-Tipton sale.

Pope has spent millions buying prospective broodmares but so far has not reaped large rewards.

Jane Lyon of Summer Wind Farm bought the 10-year-old For Royalty during the second Book 1 session of the Keeneland auction.

Songbird, Medaglia d’Oro out of Ivanavinalot, by West Acre, was a $400,000 graduate of Fasig-Tipton's 2014 Saratoga Yearling Sale and was campaigned by Rick Porter’s Fox Hill Farm,

She won her four 2-year-old starts by a combined 22 lengths, capped by winning the GI Breeders’ Cup Juvenile Fillies and won the 2-year-old Eclipse Award.

She missed the 2016 GI Kentucky Oaksdue to a minor illness, but Songbird then ran her winning streak to 11 with victories in the GI CCA Oaks, GI Alabama Stakes and GI Cotillion Stakes before dropping a nose decision to Beholder in the GI Breeders’ Cup Distaff.

Despite that loss, she still had won enough to win a second Eclipse.

This year, as a 4-year-old, she won the GI Ogden Phipps Stakes and the GI Delaware Handicap before missing by a neck to future GI Breeders’ Cup Distaff winner Forever Unbridled, by Unbridled’s Song, in the GI Personal Ensign Stakes in August.

FOR ROYALTY is a genetic freak, having produced four winners by four different stallions.

The most notable of For Royalty's offspring is her daughter by Bellamy Road, Constellation, who won the 2016 G1 La Brea Stakes, but she also produced stakes-placed runners Back Flip, by Super Saver, Upper Room, by Harlan's Holiday, and Queen Mum, by  Paynter.

"She's an incredible mare. She's been bred to four different stallions with four winners and one of the genetics guys was back there today saying it's unheard of," consignor Craig Bandoroff said. "He took DNA because they want to try and figure it out. So she was special."

"It kind of looks like whomever they bring her to is a good mating," said Bandoroff. " She really had it all. And they have to bring that kind of money."

For Royalty's proven record was backed up with lovely conformation and pedigree to match.

"For Royalty is out of a mare we bought from Frank Stronach's dispersal a number of years ago," said For Royalty's breeder Cynthia McGinnes.

The late multiple stakes producing mare Taft Lil Queen was a full sister to stakes winner Irish Cherry and was the dam of G2 winner Kiss to Remember.

"WE'VE SOLD over $1 million worth of foals from Taft Lil Queen over the last 10 years," said McGinnes. "She never had a foal that couldn't run."

"We bought Taft Lil Queen in foal to Running Stag, and we sold that foal for $20,000," said McGinnes. "We bred her back to Not For Love and got an absolutely gorgeous foal that was later named For Royalty. We sold her at the Fasig-Tipton Saratoga sale and got $250,000 for her. That was the highest priced Not For Love foal at that point."

"For Royalty was a very good 2-year-old," said McGinnes. "She was the Maryland-bred 2-year-old champion."

"Her best foal, Constellation, sold for $800,000 as a 2-year-old in training, and she's a G1 stakes winner and is still running," said McGinnes.

"Every foal she's had is either a stakes winner or is stakes placed," said McGinnes. "That's genetically amazing, to nick with four different stallions. Usually mares only nick with one bloodline. For Royalty was sold in foal to Bernardini, and that's the best stallion she's ever been bred to. She was sold to Summer Wind, and they breed for the commercial market."

"We hoped she would be somewhere between $1.5 to $2 million," Bandoroff said. "It's like the expression we use with the yearlings when they `tick all the boxes' like she did. Another big thing with her was her age. She's only 10, and that is a big, big factor."

Lyon said her goal was to purchase mares who were already proven products, and with For Royalty carrying a foal by Bernardini, Lyon said she was her top pick of the Keeneland auction.

"She fits our program. Actually, she was probably our top pick here," said Lyon. "We're so excited to have her. Her pedigree and the fact that as a relatively young mare she has multiple stakes horses, you don't see that often. So we're pretty excited about it."