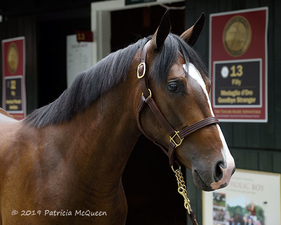 For the East coast representatives, a Pa-bred Medaglia d'Oro filly out of Goodbye Stranger, by Broad Brush, consigned by Taylor Made Sales Agency, sold for $450,000 to Mike Ryan, Agent.

A second Pa-bred, a filly by Hard Spun out of Wembley, by Bernadini, consigned by South Point Sales Agency, was bought by Coffee Pot Stables for $360,000 and the third, a filly by Distorted Humor out of Amber Grace, by Elusive Quality, consigned by Warrendale Sales, Agent, sold for $180,000 to Quarter Pole Enterprises.

PENNSYLVANIA'S neighboring states didn't fare as well, with the only Md-bred not sold and the two from Virginia also not sold. 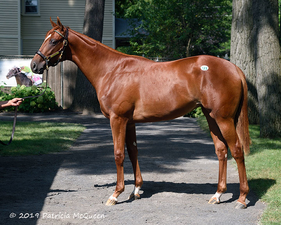 Hip173 By Distorted Humor out of Amber Grace (Photo by Patricia McQueen)Lael Stable, owned by Mr. & Mrs. Roy Jackson pf West Grove, Pa., bought a colt by Uncle Mo out of Chattertown, by Speightstown, for $475,000.

There continues to be a huge demand for colts by Curlin, and he sired the two sales toppers, both Tuesday evening and both at $1.5 million, with hip 174, a chestnut colt out of America by A.P. Indy, bought by West Point Thoroughbreds for Woodford, Siena, Valdes, Singleton, Sandbrook and Freeman.and the other, hip153 out of Wapi by Scat Daddy, purchased by Aquis Farm, Let's Go Stable and Crawford Farm Racing.

There's a relatively new wave of top buyers getting together to share the expense of high prices yearlings.

“We live in a very realistic market, buyers are certainly willing to pay what they consider a fair price and then maybe a little bit,” said Fasig-Tipton President and CEO Boyd Browning. “There’s tremendous competition at the upper end of the market, people want horses to run at Saratoga next summer or in the classics two years from now, and they are willing to pay for them.  But they have limits. Sometimes they partner up to spread the risk, which has kind of become a way of life among the buying group that tends to minimize the ‘craziness’ at the top of the market."

There were a lot of success stories," said Russell Jones of Unionville, Pa., a top bloodstock agent who founded and later sold Walnut Green. "It was a great looking group of horses, and the ones that made the cut were well received. Curlin and Into Mischief were the two biggest success stories."

The only drawback to the sale was the number of buybacks, with 47 not sold.

Both pedigrees and conformation have to be almost perfect for the top sellers, and those that didn't make that cut suffered.

"Our goal was to put together a group of quality horses," said Browning. "The world continues to shrink, and we recognize that. We very simply try to get the bet collection of horses that we can. We have a great team and we feel enormous pressure going into the sale to get it right.

The opening night was "similar to last year, slight increases in average, slight increase in median, which basically we said all week leading up to the sale that we were very confident coming into the sale,”said Browning. “We thought we had a good catalog, coming off a record sale last year, it’s hard to continue significant growth once you reach certain levels. Very pleased. The results were in line with our expectations based on the feedback we received on the sales grounds this week from both buyers and sellers alike.”

“We saw very competitive bidding throughout the evening, lots of quality horses walked through the sales ring tonight, with a diverse group of buyers, and lots of strength and diversity in the buyers,” he said. “Overall I’m very pleased and excited with another outstanding group of horses on deck. It will be another outstanding session tomorrow night."

Tuesday evening brought even higher prices with the average price rising to $442, 865. 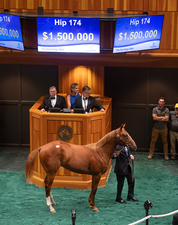 Hip 174, by Curlin out of America, with Terence Collier, right, in the auction stand (Photo by Tod Marks)“We had a remarkable group of quality horses on offer tonight and the buyers responded very favorably." said Browning. "The consignors, owners and breeders provided us the opportunity to sell a great collection of horses tonight and over the last two nights. We felt confident coming into the sale. We felt confident this spring when we were seeing the horses.

“It’s remarkable to think we averaged $442,000 tonight. I would not have dared to think this morning that we’d average $442,000. But we really felt good last night and knew we had a lot of valuable horses today, a lot of interest and positive feedback. We’re thrilled overall with the results of 2019.

"We’ll try to make 2020 a better group of horses, we’re not going to be content with status quo," said Browning. "We think this is the greatest place in the world to sell a nice yearling. It’s a special place, a great atmosphere to sell a horse, a great atmosphere to race a horse. It’s pretty cool we’ll be busting our tails because it’s the 100th anniversary of Saratoga."

Terence Collier, the director of marketing who has been in the auction stand for almost 40 years, is retiring at the end of the year.

"I'd forgotten that next year is the 100th anniversary," said Collier. "I'll have to come back as a guest."