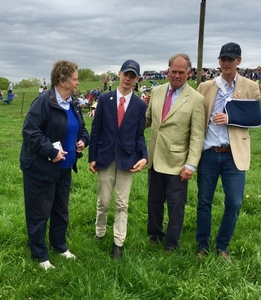 Wendy Hendriks, left, with Ricky's son Porter, Ricky Hendriks and his son McLaneWendy bought  hip number 557, Supervillain, a 3-year-old by Super Saver out of an Empire Maker mare, bred by D.D. Matz, for $24,000.

"We've had great luck buying horses that broke slowly and then making them into jumpers," said Wendy Hendriks. "I saw Supervillain and loved the way he moved."

"He may run on the flat a couple of times, but the plan is to make him a jumper," said Hendriks.

Trace has started 13 times with one win, one second, three thirds and four fourths, having run in allowance races since breaking her maiden in a maiden special weight race at Ellis Park last year in her fourth start.

"I LOVED everything about her," said Hendriks. "I liked her form, I liked her pedigree, her conformation and the vet report. Ricky will train her as a flat horse. She may go to Colonial Downs."

"Ricky bought one to be a jumper," said Hendriks.

"I go for the physical look and the cardio," said Miller. "I like early foals out of fast mares, and then it's a matter of matching the horse to a person. Does it always work? No. But does it work often? Yes."