With over 500 yearlings catalogued, Fasig-Tipton added a partial day, Monday to the sale, starting that day at 4 p.m. 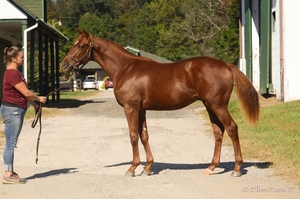 "There were 10 Super Ninety Nine yearlings catalogued, and they averaged around $25,000," said Mike Pons, who, with his brother Josh, in 1981 took over the management of the farm founded by their grandfather, Adolphe Pons.

"Like all the sales, some sold extremely well," said Miller. "The state-breds add some solidity to the market. The Pa-breds and New York-breds can earn state-bred awards and that can warrant their price."

"I may sell him as a 2-year-old in training, or I may keep him and race him," said Hendriks.

"We're keeping the Animal Kingdom out of Untiltherewasyou to race," said Mrs. Mcginnes, who, with her husband Charles owns Thornmar Farm.

While the average was up at the Fasig-Tipton sale, so were the not solds.