LEXINGTON, Ky.--Twenty-eight colts and fillies by Union Rags went through the ring at the Keeneland September Yearling Sales, Sept. 11-23, selling for an average of $149,000, well above the average sales price of the sale, which, at $120,487, set a new record for an average.

Gross sales surpassed $300 million, up 12.81 percent over 2016, with record average and median prices and 13 horses selling for $1 million or more. 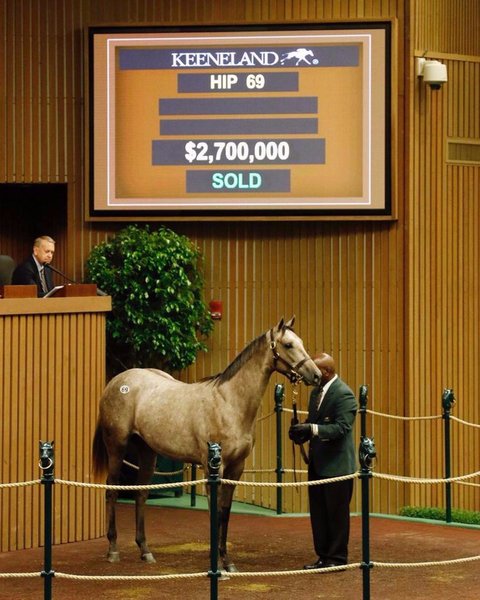 The top priced yearling was hip number 68, a filly by Tapit who is a full sister to G1 winner  Cupid that was bought by M. V. Magnier for $2.7 million, and for the second consecutive year Tapit was the leading sire, with his 17 yearlings averaging $950,000.

"He is a really nice colt, and we really liked him," said Miller. "He jumped through all my hoops."

"He's in Ocala now, with the American Pharoah team," said Miller, referring to the group that handled the Triple Crown winner. "Hopefully, he'll be as nice as American Pharoah."

"It was a very strong sale," said Miller. "A frighteningly strong sale. It kept its momentum the whole way. I've never seen anything like it."

The other $475,000 colt, hip number 863, was bought by Xavier International Bloodstock.

"Overall, it was a good sale for the get of Union Rags," said Russell Jones, former owner of the bloodstock agency Walnut Green who is now assisting Union Rags' owner, Phyllis Wyeth, who is a cousin of Jones' wife Donnan.

"But, considering the results of his get at the racetrack last weekend, it could have been even better," said Jones, commenting on the results at tracks that occurred after all the Union Rags' colts and fillies had been sold.

"Paradise Woods won a G1 stakes in California by over five lenths, and two maidens won in the East," said Jones, referring to three of the six wins of Union Rags' get over the last three days of September. "He's on such a roll at the racetrack."

Paradise Woods won the $300,000, G1 Zenyatta Stakes for fillies and mares three years and up at 1 1/16 miles at Santa Anita on Sept. 30, winning under a hand ride by 5 1/2 lengths to become Union Rags' top performer, now with two G1 stakes in her resume.

Top price was Thornmar’s Flatter colt out of Argentesque, by Silver Deputy, who is a half-sister to $860,406-earner Aggadan, a three-time stakes winner and G1-placed sprinter, and stakes winner Love You Madly, from the family of Forry Cow How.

"The Keeneland sale was very much like other sales this year," said Cynthia McGinnes, owner of Thornmar Farm. "People want perfection, and they're willing to pay for it. Ones with a little less pedigree or with a minor thing that would never bother them on a racetrack bring less than you'd hoped for."

The other three, despite good pedigrees and conformation only brought $69,000 between them.

Patti Miller, agent for EQB, bought a son of Bodemeister out of Safe Journey from Dark Hollow Farm for $280,000, and Justin Zayat signed the ticket for for the full brother to 2017 stakes winner O Dionysus.

Safe Journey, from the family of Hall of Famer Safely Kept, is also the dam of stakes winner Joy and stakes-placed Combat Diver.

A Scat Daddy colt out of Not For Love’s stakes-winning daughter Love’s Blush, bred by Sycamore Hall Thoroughbreds and consigned with Hidden Brook, agent, sold to M.V. Magnier for $275,000.

He is from the family of G1 winner Tactile and graded stakes-winning Brushing Gloom.

The first Maryland-bred went through the ring on the second day of the sale, hip number 376, a colt by Uncle Mo out of Kanani, by E Dubai, and he was bought by Bradley Thoroughbreds, agent, for $270,000.

The top-priced filly was bred by Avia Pitts, by first-year sire Cairo Prince out of Rey Lake, by Meadowlake.

A half-sister to juvenile stakes-winner Bessie’s Boy from the family of Ponzi Scheme, the bay filly was purchased by John C. Servis, agent, for $260,000.

A Brushwood Stable-bred filly by Tapit out of Wile Cat, by Storm Cat, was the most expensive Pennsylvania-bred to sell, bought by Don Alberto Corporation for $700,000.

The half-sister to Group 3 winner and Breeders’ Cup-placed Shumoos is a granddaughter of Brushwood’s famous matron Strategic Maneuver.

The Tapit filly sold as a weanling for $500,000 as part of the Brushwood bloodstock reduction at the Keeneland November sale, where her dam also sold, for $600,000.

The second-highest price was $550,000 for the Blackstone Farm-bred Scat Daddy filly purchased by Godolphin, who is is the first foal out of stake-placed Seanchai, by English Channel.

A spectacular crop of yearlings brought bidding wars among national and international buyers throughout the auction, driving gross receipts above $300 million for the first time since 2008, with record average and median prices and the sale of 13 seven-figure horses.

Thirteen horses sold for $1 million or more versus nine in 2016, and they were bought either individually or in partnership by nine different buyers.

Eight of the seven-figure horses sold in the opening-day Book 1 session.

For the eighth consecutive year, the September Sale produced the top-priced yearling sold at public auction in North America.

The sale’s three highest-priced yearlings were progeny of Tapit.

Whisper Hill Farm went to $2.6 million for a colt from the family of multiple G1 winner Gun Runner from the consignment of Taylor Made Sales Agency, agent.

For the second consecutive year and the third time in the past four years, Tapit was the September Sale’s leading sire by average.

Four of Tapit’s yearlings sold for $1 million or more.

Four yearlings by War Front brought seven figures, led by the $1.9 million paid by Donato Lanni, agent, for a colt out of G1 winner Iotapa, consigned by Taylor Made Sales Agency, agent.