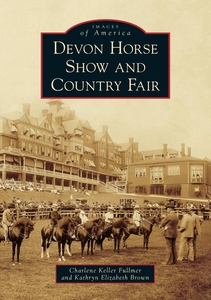 Dedicated to the volunteers who have supported and enriched the Devon Horse Show and Country Fair for the last 125 years, this book depicts the history of this iconic event.

In May 1896, residents along the Philadelphia Main Line organized a meeting on the lawn of the Devon Inn inviting friends and neighbors to "effect an organization for the purpose of holding a Horse Show at Devon."

In the aftermath of World War I, the Devon Horse Show incorporated a country fair in 1919 to support a local charity and selected Bryn Mawr Hospital as its beneficiary.

Images of America: Devon Horse Show and Country Fair follows the organization from its humble beginnings as a one-day show for local breeding farmers in the Philadelphia countryside to its rise as a premier international equestrian event.

While it draws top competitors from around the world, the Devon Horse Show and Country Fair remains uniquely rooted in tradition and community.

MORE THAN 2,500 volunteers return year after year, generation after generation, to ensure its success for the benefit of Bryn Mawr Hospital.

“This book is designed to memorialize the past and preserve some of our magnificent history and traditions for future generations to enjoy and reflect,” said Wayne W. Grafton, Chairman and CEO of the Devon Horse Show and Country Fair. “Just as the cancellation of the show during World War II infused new life into this organization, we return in 2021 grounded in our history with a renewed purpose to make Devon the ultimate experience for our competitors, volunteers, supporters, and spectators. Devon will go on. Our future is bright and our traditions remain strong. Please join us in celebrating our history and our future on this wonderful 125th anniversary.”

The Devon Horse Show started as a one-day event that consisted of approximately 30 classes.

Over the years, various disciplines were added, and classes now include hunters, jumpers, Saddlebreds, Hackneys, and roadster and harness ponies.

It is now recognized in the National Show Hunter Hall of Fame.

A few years ago, arena eventing was added to the program, which further increased attendance and excitement.

As a premier international equestrian event, Devon has included several Olympian exhibitors and attracted national figures, from presidents to celebrities, who have spectated, competed, or otherwise enjoyed 11 days in May.

Images of America: Devon Horse Show and Country Fair is available for purchase here or anywhere books are sold.

It will also be available for purchase during the competition’s 125th anniversary held May 27 - June 6, 2021.