WELLINGTON, Fla.--California Steffen Peters won yet again in the Grand Prix Special CDI5* on Feb. 22 to remain undefeated on Suppenkasper during the 202 Dressage Festival at the Palm Beach International Equestrian Center. 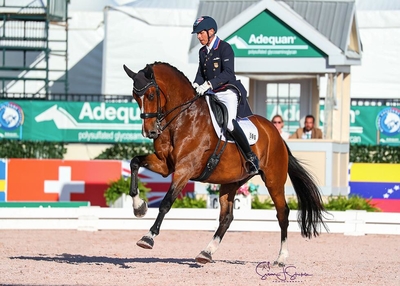 Steffen Peters on Suppenkasper (Photo by Susan Stickles)Peters threw his hands in the air as his winning score of 77.106 percent was announced in the Grand Prix Special.

He was last to go in the class of 11 starters in the five-star week seven of the Festival.

Peters’ score represented a new personal best in this test, and his delight with Suppenkasper was evident as he punched the air.

Canada’s Brittany Fraser-Beaulieu rode All In to a new personal best score of 73.447 percent in this test to finish second, with Sabine Schut-Kery, born in Krefeld, Germany but now living in Thousand Oaks, Calif., finishing third on Sanceo with 72.979 percent.

Despite a mistake in the middle of the one-time changes on the diagonal, this was the first time Peters had broken the 77 percent barrier and repays the faith he has had in this giant and extraordinarily athletic horse.

“HE'S BEEN AT 76 percent for some time,” said a delighted Peters. “I knew there’s a 77 percent in there, and we’re slowly and consistently creeping up, so without the mistake it would have been even higher. It’s so very exciting to see ‘Mopsie’ getting a 77 percent.

“It felt really good for him to still after four shows have this energy,” said Peters. “The horse has so much go, it’s incredible. I didn't push him for one single extension; in fact I was still holding back a little bit.”

The test was fault-free apart from a blip in the middle of the diagonal of one-time changes.

“He’s done six tests without a mistake, so today he was allowed one and I’m not sure it was his mistake, there is always the rider involved too," said Peters. "To be honest, I just did not feel comfortable with the way my underwear was sitting so when I came in, that’s what I was thinking about. Thank God it didn’t cause me more trouble than just a missed one-tempi.”

Both Peters and Schut-Kery have been training with Debbie McDonald while in Wellington, and the trainer identified what went wrong for Peters in the flying changes right away.

“Debbie said she thought that before the one-tempis I rode him just a little too forward on the short side to get a bit more energy and ride the one-tempis with risk,” said Peters, who was on the bronze-medal winning USA team at the Rio Olympics in 2016. “She’s absolutely right that I didn’t need to do that.”

Fraser-Beaulieu, who had her first child eight months ago, also had a new personal best on her own 15-year-old All In, a son of Tango, despite breaking to canter in two extended trot movements.

“I was very excited about how All In felt today,” she said. “I had a very short warm-up, just 15 minutes — which was maybe a little bit too short — but he came out feeling better than ever and I thought the passage was pretty incredible today. Both extensions were completely my fault. I pushed him too much because I was trying to beat Steffen! So that was totally rider error, but to come out and have two 73 percent scores this week — personal bests on both days — that’s very exciting leading up to Tokyo.”

Schut-Kery had a tricky start to her test on Sanceo, which saw the pair trending below 70 percent for the first portion of the test.

“He was definitely hot, I could feel it in the warm-up, but then there was no more time so you have to just get going,” she said. “But, as a rider, I’m almost more happy because it’s amazing if you can turn it around in the test, and I felt like I had a really nice canter tour from him. He recovered and I was able to carry that into my final piaffe and passage on the centerline. I also have to remember that he really hasn’t done that many grand prix, so I am all smiles.”

She finished third in Thursday’s qualifying grand prix, but was back on winning form Saturday, riding Mango Eastwood to 71.979 percent and a unanimous first place from all five judges.

“It was so fun,” said the four-time Olympian, who used to ride for Canada and still trains most of the Canadian senior team riders. “Mango is an amazing horse and I’m very lucky to have such a great horse.”

Holzer only began competing at big tour with Mango Eastwood last month and has won three of their four starts at the Festival.

The gelding was formerly competed in the young horse divisions by Spain's Jordi Domingo Coll but has been out of the international ring for four years.

Holzer, who is 56, has been riding him for two years.