FAIR HILL, Md.--Erin Syllvester on Paddy The Caddy moved up through the three phases from eight to second to first to win the CCI 4* Event at Fair Hill on Oct.20. 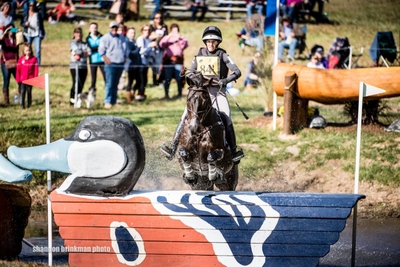 Erin Sylvester on Paddy The Caddy on cross counry (Photo by Shannon Brinkman)The leader board in the 4* changed dramatically from Saturday to Sunday, with Canadian Waylon Roberts on Lancaster, leading on his dressage score of 31.1 after the cross country, dropped four rails in the stadium jumping on Sunday to drop to seventh, while Lauren Kieffer, third on D.A. Dumas after cross country, withdrew before the jumping phase.

Sylvester of Cochranville, Pa., was eight in dressage on a score of 33.9, added just .4 time faults cross country and was clean jumping to win on 34.3

Californian Mia Farley, just 19, who moved east a year ago to train with David and Karen O'Connor, on BGS Firecracker, was 22nd on 38.3 after dressage, was one of only four double clear on cross country and was clean jumping to finish second on her dressage score.

Jenny Caras of Cartersville, Ga. was tied for 26th on a score of 40 after dressage and was also double clear on cross country to finish third on her dressage score.

NEW FEI rules caught out Phillip Dutton of West Grove, Pa. on Z, who was originally believed clean cross country to be in first, but Z knocked a flag down on a cross country fence and was assessed 15 faults for not having the entire body of the horse over the fence.

Another new rule assesses 11 faults for knocking down a frangible fence.

Woods Baughman on C'est La Vie won the 3* over Colleen Loach on Vermont and Caitlin Silliman on Ally KGO.

Dutta Corp. again was the sponsor of Fair Hill, and Dutta presents a free plane trip to the winner of the 4*.

"This has been a great partnership for the last eight years," said Tim Dutta, CEO of The Dutta Corporation. "My family and I are very involved in the top sport of horses and I really love Eventing because it's truly a sport of horsemanship. Derek is a master course designer, the ground rode well, and you had top sport and you had very worthy winners."

"Most important, I thank the community for supporting The Dutta Corporation, because without your support, we cannot give back," said Dutta. "We're really happy to be a part of the eventing community and to support Fair Hill as well as the national championships."

"For the free flight, i would love to get Paddy to Burleigh sometime," said Sylvester. "But we have to manage him really carefully and strike while the iron is hot." 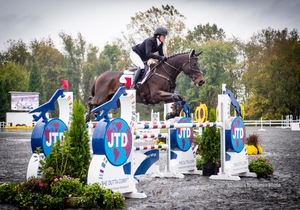 Erin Sylvester  show jumping on Paddy The Caddy (Photo by Shannon Brinkman)"He felt a little bit tired, but he has endless heart to do the best he can when he's in the ring," said Sylvester. "It's been my goal to get this event done and done well for a while now. We've hit a few bumps in the road during the season, so it was great to put that all behind us and have a good weekend."

"The cross country walked tough to me," she said. "It rode tough as well."

Saturday was a beautiful day with perfect weather for the cross country, but on Sunday a chilly rain fell all day.

"I really dislike show jumping in the rain," said Sylvester. "I feel like I'm all over in te tack. Luckily, Paddy jumped straight today."

"This was the first two-star that I did a long time ago," said Sylvester. "I love this event-it's a local event for us. It pulls the whole community together. I'm excited to see what the future holds on the other side of the road."

Next year, Fair Hill will host a 5* event in a new venue on the other side of Fair Hill, where the steeplechase course is.

Mia Farley, riding in both CCI divisions, was Reserve Champion in the CCI 4*on BGS Firecracker, her 9-year-old Irish Sport Horse mare. 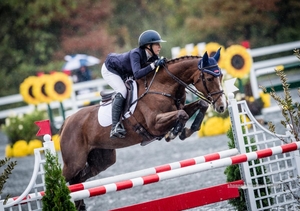 Mia Farley on BGS Firecracker (Photo by Shannon Brinkman)She also won the Markham Trophy as the highest placed U.S. young rider in the CCI 4* for the second year in a row.

"Overall had so much fun all week. although it was a little stressful," said Farley. "I feel incredibly lucky to be here. Coming from California, it's always been a goal of mine to come to Fair Hill and experience the track and I never would've thought that I'd finish as well as I did. David has heped me a lot."

"I'm lucky to have my horse," said Farley. "She loved the course today. She tries her heart out for me. She's very careful."

"The cross country was so much fun," said Farley. "I'm in the Under 25 program, and that's been a huge help." 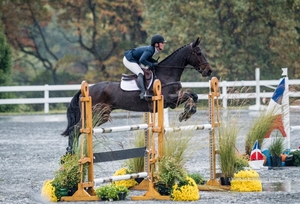 Jenny Caras on Fernhill Fortiturde (Photo by Shannon Brinkman)"I love riding at Fair Hill, and I love riding around Derek di Grazia's tracks," said Caras. "It's so nice as a rider to be able to go out on cross-country and trust that the course designer has set something that you can really ride forward and bold to, and if you do your job as a rider, the horses will understand it".

"In the past, the show jumping has been a bit tricky for us," said Caras. "I used to put him in a lot of hackamores and bigger bits to try and hold him, but now I've just taken him back to a snaffle and have really focused on getting the jumps to hold him. He was great in there and I couldn't be happier with how he finished."

"I was so happy when we finally made it over the last rail," said Baughman. "I can breathe for the first time since yesterday. He was a little tired this morning but then I took him out and rode him first thing, and he immediately snapped back to and gave me everything he had. When I got on him this afternoon, he was just right there with me and ready to put it down."

Reserve Champion in the CCI 3* was Canadian and Olympic veteran Colleen Loach on Vermont.

"I'm thrilled with Monty," said Loach. "He was jumping me out of the tack in the warm-up and he jumped really well on the course. He handled the atmosphere and the weather really well, so I'm proud of him. He was really fresh this morning-he didn't feel tired at all actually, so that bodes well for the future, for sure."

Finishing on her dressage score of 29.8, Silliman of Swarthmore, Pa., on Ally KGO  was third in the CCI 3*.

"She was great," said Silliman. "You never really know when you are bringing them up the level to their first really tough one. She was good yesterday and the weather was great, so we had that in our favor. The rain was tough today because it makes the tack a bit slippery, but it did cool out so that keeps them fresh."