UPPERVILLE, Va.--Scott Stewart once again captured top honors, claiming four of the day’s five division championships he competed in at the Upperville Colt & Horse on June 5. 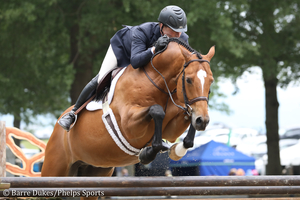 Stewart was repeating his Grand Hunter championship at Upperville, and just a week earlier, Stewart had been the Leading Hunter Rider at Devon.

Stewart and Private Life, an 8-year-old Dutch warmblood gelding, acquired points in the High Performance Conformation division, sweeping Wednesday’s competition with blue ribbon rounds in the over fences class, handy round and under saddle.

“PRIVATE LIFE was great today, he was also good yesterday," said Stewart after winning the championship. "Today, with the handy round, proved to be a bit more difficult than we planned. I think there were a lot of ups and downs for all of our horses. He’s been champion two years in a row and champion at all three indoor horse shows. He is a pretty laid back horse, he’s like a big pony, you have to wake him up a little bit. He really just comes from the stall to the ring, he doesn’t need any additional lunging. He’s just a super horse.”

Stewart swept the division between his two mounts, winning the High Performance Conformation championship with Private Life, and Lucador, who was champion 2017 and 2018, was reserve champion this year.

Catch Me won four of the division’s five classes, sweeping Tuesday’s competition in both over fences and under saddle classes, while also winning Wednesday’s handy round.

“Upperville is one of my favorite horse shows, and it’s one of the oldest horse shows," said Stewart. "As far as the hunter divisions, it’s about as prestigious as you can get. We always try to do our best here. I think it’s a great honor to be Grand Hunter Champion, especially here. There are a lot of great horses and riders and it’s Private Life’s first time being Grand Hunter Champion here, so it’s a great honor.”