LANGLEY, Canada--The U.S. Show Jumping Team earned a spot in the Nations Cup Final with a bronze-medal finish in the third and final round of qualifiers in Canada. 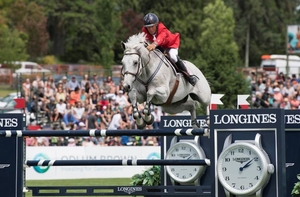 Richard Spooner and Quirado RC (Photo by Rebecca Berry)Robert Ridland served as chef d’equipe of the U.S. team of Lucy Deslauriers, Eve Jobs, Jenni Martin McAllister and Richard Spooner as they finished on a total of 12 faults.

“It’s what we came to do,” said Ridland. “We always aim for a podium finish, and in this case it was more necessary than ever because we knew that if we had a podium finish, we’d end up in Barcelona. We really needed every ride we got; all four riders had a score that counted and really fought for that spot on the podium.”

“RICHARD was very good in the Nations Cup in Mexico on May 5, where he also jumped two clean rounds,” Ridland said. “He’s had four consecutive Nations Cup rounds without a rail down, and that’s tremendous.

“Over the last few years, we’ve seen several younger riders really step up,” Ridland said. “Lucy had a big moment at Barcelona last year when she stepped up, and today we saw Eve do the same thing with her two clear rounds. It’s gratifying to see that because it’s so important for the future of our sport.”

McAllister of Lemitar, N.M., rode Escada VS to 16 faults in the first round but improved to just four faults in the second round.

Deslauriers of New York, N.Y.), on Hester served as the anchor pair and produced a crucial eight-fault counting score in the first round and had some difficulties in the second round.

The Canadian team clinched the gold medal with four faults, while Ireland took the silver with eight faults.

The Mexican team, who had won the USA and Mexico legs of the  Nations Cup North and Central American and Caribbean Division, placed fourth in Canada but maintained their hold on the top spot of the division standings to qualify for the Final in Barcelona along with the U.S. team, which finished in second in the division.

THE CHILDREN'S and Junior Nations Cup, with four riders from the Delaware Valley, both won gold medals. 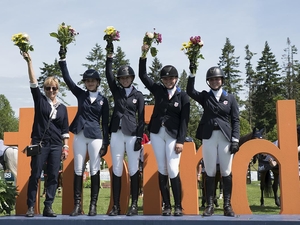 The Junior team (Phtoo by Rebecca Barry)In an opportunity to gain valuable experience in a team setting, the U.S. Children’s and Junior Nations Cup teams jumped against their counterparts from Mexico and Canada at Thunderbird Show Park on June 1.

Both teams were victorious under the guidance of Chef d’Equipe DiAnn Langer.

“We had a fantastic day,” said Langer. “I couldn’t be prouder of both teams. This type of experience is invaluable for our future top riders and they all showed all the potential that they have.”

The Junior riders put themselves well ahead after the first round of their Nations Cup, leading the competition with four faults as Mexico had 12 faults and Canada had 13 faults.

In the second round, Amelie Bittar of Los Angeles, Calif.,was clean on Star Girl B to set the pace, and Hannah Loly of Rancho Santa Fe, Calif., clean as well with Ayma de la Demi Lune.

Maggie Kehring of Woodside, Calif.. on Cole Haan had four faults in round two after jumping clean in round one, but the U.S. Juniors were so far ahead that the anchor rider, Emma Callanan of Lebanon, N.J., on Quinleen, who had turned in a score of four faults in the first round, didn’t have to jump again.

“The riders on the Junior team are all nicely seasoned, with experience in the] North American Youth Championships and the Zone Jumper Team Championships,” Langer said. “They know their horses well, settled in, and were able to stay focused.”

THE CHILDREN'S competition came down to an unusual three-way jump-off between the U.S., Mexico, and Canada after each team finished the first round with 12 faults. 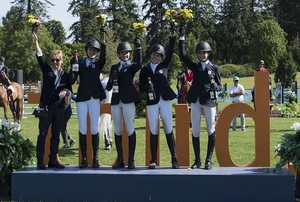 The U.S. Children's Jumping Team (photo by Rebecca Barry)The U.S. team won the gold medal with a jump-off score of zero in a combined time four seconds faster than that of the Canadian team, which won the silver medal.

Hunter Champey of Far Hills, N.J., was the pathfinder for the U.S. and jumped a fast, clear jump-off round with Hill Top van het Gavershof.

“They were a little bit nervous in the first round, so they had those 12 faults, but then they really pulled it together,” Langer said. “In the jump-off, they knew what they were supposed to do. Some were to go their normal speed and get a clear round, others were able to go faster and make sure we had fast enough rounds that we could beat anyone we might tie with on faults.”