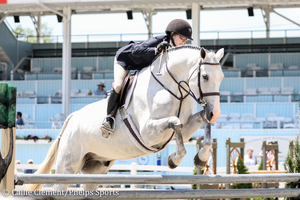 Becky Gochman and Catch Me Gochman won the Amateur-Owner 3’6” over 36 Hunter Championship en route to the Grand Championship with her longtime mount Catch Me, a 12-year-old Holsteiner gelding.

The gelding, who has been made into a Breyer Horse Model, placed well throughout two days of competition to earn 33 points.

Their win in the $3,000 Amateur-Owner Over 36 3’6” Hunter Stake sealed their championship win.

“Catch Me was great," said Gochman. "It was a little nail biting to the end, but he was consistent so he was able to pull off the championship. He has just been a dream horse. In the past three years I think I can count on one had the amount of times he hasn’t been champion or reserve. He has the loveliest and lightest personality. His barn name Snoopy fits him so well because he is so sweet in the barn. His jump, his movement, and everything is so amazing. He is a very dear friend to me at this point, I love him so much.”

THE JUDGES chose Catch Me for the Sambalino Award, which is presented to the hunter that best models the classic hunter horse in movement, style and presence.

The perpetual trophy was donated by Gochman herself in honor of her late partner Sambalino, a chestnut gelding who won countless amateur-owner awards but tragically passed away from colic in 2014.

“I think I gave away all of my ribbons and trophies from today, but I had to keep the ribbon that said ‘Sambalino’ on it because I still believe that Sambalino was my soulmate." said Gochman. "He was very special to me in every way. I never thought that I would get another horse of that caliber, but Catch Me is that horse. Part of me always thanks Sambalino for that. I think he is there in my heart, and he helps me every bit of the way. I have his horseshoes above my doors in my home in Wellington, he is with me in every way. To win the Sambalino Trophy with Catch Me is very special.”

“At the Devon Horse Show, it’s so fun because there are so many different kinds of spectators," said Gochman. "I feel like they love the Devon Horse Show. To be able to bring a smile to any of those people’s faces by letting them feel like they have a connection to the horses here is pure joy for me. There was a kid today that had a Breyer Horse of Snoopy, and I signed it, and she was able to give Snoopy treats. It’s special. I came here when I was 6 years old and I didn’t have a horse, and Devon is partly why I’m so hooked on this. I like to try to give back as much as possible.”

DANHAKL and Enough Said, the Grand Amateur-Owner 3’3” Hunter Champions, have been together for six years and know each other well, which they demonstrated through consistent high placings over two days of competition. 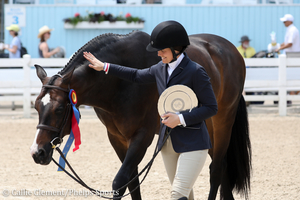 Stephanie DanhaklDanhakl scored 32 points, by winning two out of three over fences classes.

Trained by Scott Stewart, Ken Berkley, and Nancy Ciesluk, Danhakl was well prepared to compete at the Devon Horse Show.

Up next, Danhakl will head to the Upperville Colt & Horse Show.

“Enough Said is 13 years old," said Danhakl. "I have had him for six years, and this is our fifth Devon together, his fifth consecutive tricolor and his third time as Grand Champion. He is a real sweetheart. He has his own way of going, and I don’t really have to do a whole lot. He is almost like a wind up toy – you get your pace going and every distance shows up perfectly. He is very careful, so I never worry about rails. He is a really sweet horse."

“It means a lot to me," Danhakl said of winning the championship. "I just started training in Boston with Nancy Ciesluk, who helps me there. I train with Scott Stewart and Ken Berkley other times. Nancy’s son passed away three years ago from cancer, and his birthday is today, so it means a lot that I could bring her this win today when she is feeling a little down. It is really exciting to have a horse for this long that is still going well and loving his job.”