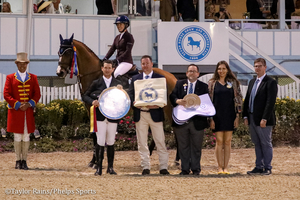 She rode her own Oasis Spirit to a fourth and third in Thursday morning’s $36,000 Main Line Challenge and in Friday’s $36,000 Devon Speed Derby respectively, to accumulate 21 points.

The final class of the Open Jumper division, the $72,000 Idle Dice Open Jumper Stake, had 35, eight of which were clean.

THERE WERE rails down throughout Guilherme Jorge’s first round course, but the C element of the triple combination caused the most problems, with eight horses having it down.

The top three finished within just fractions of a second of each other, with Derbyshire and Roulette BH the quickest of five double-clear, finishing in 34.28 seconds.

David Oberkircher of Collegeville, Pa., was second on Upper in 34.50 seconds, while Lillie Keenan on Chaccolette was third in 34.68 seconds.

“It’s unbelievable," said Derbyshire, who was also the 2017 Leading Rider. "The atmosphere and crowd is better than anywhere I’ve ever ridden, actually. Everyone gets together and it feels very special. To win the class and championship on the last night, it means a lot. I only jumped Roulette BH in one other class as a warm-up on Thursday morning in the Main Line Challenge, and he was seventh and clear. The big aim for him for the week was tonight so I was glad that we saved him for it. He performed well tonight.” 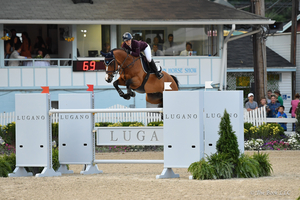 Amanda Derbyshire on Roulette BH (Photo by The Book LLC)“I’ve actually had him for exactly a year today," said Derbyshire. "Last year at Devon was our debut show together. We just did a couple of smaller classes. He’s been such a great horse. He’s very, very careful. We’ve always taken it slow with him and tried to work on his rideability because I’m little and he’s very strong, but that’s all come together in the last six months and now we are able to go fast in the jump-off with control.”

“David Oberkircher had the winning ride before I went in, and he actually did seven up the first line and seven down the last line," she said. "I kind of stuck to my original plan of eight. My horse is a little bit of a quicker horse ,and just fractionally we beat him. I thought the course in the first round was a little tricky, definitely trickier than it walked. It was nice though, it was perfect. Thank you to Becky Gochman for always supporting me and owning such a great horse. I’m lucky to have him.”

“Hopefully we’ll do a couple of Nations Cups this summer," said Derbyshire. "We’re all going to Europe for a little summer tour with the Gochman family and River’s Edge so I’m excited about that. We’ll get to do some nice shows and get some more experience.”

“It’s always nice to win another title here," said Ward, who has been Leading Rider and Champion numerous times. "We had a great grand prix night. We had some other young horses here who jumped some very good, clean rounds so it was a good week. The atmosphere is phenomenal and the facility is amazing. We go to Upperville next week.”

“Contagious has been great over the last year but had a long break after Florida — now a month off," said Ward. "He’s a bit rusty. Rapidash is a new horse and is becoming more and more consistent. It’s a horse that I own that is actually for sale and I think he has a big future.” 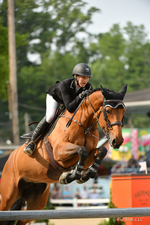 They were one of six to advance to the jump-off, finishing with the only double-clear performance in a swift 34.500 seconds.

“It’s actually a little bittersweet," said Dean. "This was my last class on Chacco’s Goldy, so I’m actually really happy to win. We’ve decided to lease her out after this. This is my first time showing at Devon. The crowd is amazing. It’s definitely one of my favorite shows. I showed the winter circuit on the West Coast and then I came to the East Coast. It was definitely one of our goals to compete here. It’s a famous show. It’s been around for a long time and I’ve always watched it on the live stream at home so it’s really special to be here.”

“I went fourth in the jump-off, so I watched the first one go, and I knew that I could leave out strides in some places because Chacco’s Goldy has such a big stride," said Dean. "Everything came up really nice and it just kind of worked out.”

“I’ve had Chacco’s Goldy for a couple of years now," she said. "She really took me up to the bigger levels. I jumped her in the 1.50m last summer and I took her to Young Riders. Don’s Diamant I got last year, and I just started showing him in some of the smaller grand prix classes. This show was really a warm-up for us to go to Upperville next week to compete in the FEI there. He was really good. He had the last fence down, but he jumped amazing this week. I’m really happy with both of them. Don’s Diamant has the biggest heart out of any horse I’ve ever ridden and Chacco’s Goldy is super straightforward and sweet. She’s just amazing.”