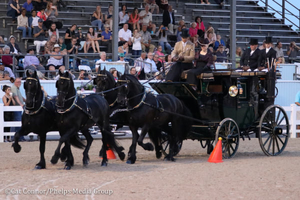 Earlier in the evening, Rich placed first in the Timed Obstacle class, defeating four other coaching combinations where teams had to maneuver around a timed obstacle course including a challenging serpentine down the middle of the ring, while displaying technique and carefulness.

Rich broke the timers with the second fastest time of 127.212 andwas the only fault-free entry allowing her to clinch the coveted championship.

“I ALWAYS wanted to have a Fresian coaching team," said Rich. "I’ve showed saddlebreds and everything under the sun, but my goal was always to have Fresians and Fell ponies. I went to Holland and picked out my first two, and then you just have to wait for the right horse. You have to wait for them to come along. When you see them, you know them. They couldn’t of been better tonight!”

“This is a 1908 Brewster Park Drag," she said. "It was built by Paul Song for the show ring, and he also did carriage racing, so he built it lighter for obvious reasons. What worked to my advantage in the obstacle course was having Thorston Zarembowicz driving!”

“It’s indescribable to be champion at Devon," said Rich. "It’s like in the category of winning the Miss Universe contest or something like that. To be the Devon champion, I just can’t believe it’s me.”