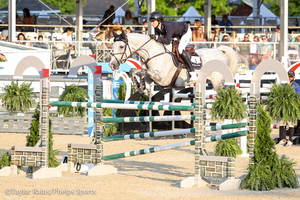 Cat Tyree on BEC Lorenzo (Photo by Taylor Rains)In a class in which the course won, only four horses from the starting field of 23 jumped clean in the faults-converted speed competition, designed by Brazil’s Guilherme Jorge.

Erynn Ballard on the first of her two mounts, Zorran, was the first to go clean, and she finished in 64.42 seconds to eventually finish sixth.

Immediately following, however, was Tyree who beat Ballard’s time by four seconds in 60.18 seconds.

FOURTH AND fifth went to Andy Kocher on Abelone O.T. Lowlands and Erynn Ballard on Judge Hof Ter Zeedycke, who each had one rail and three seconds added on to very fast rounds.

After finishing in second in Tuesday’s $50,000 Jet Run Devon Welcome Stake and fourth in Thursday’s $250,000 Sapphire Grand Prix of Devon with her other top mount, Bokai, Tyree, who trains with Missy Clark and John Brennan of North Run, was thrilled to collect her first Devon blue as a professional athlete, since last visiting the winner’s circle at Devon as a junior eight years ago.

“The horse was absolutely amazing," said Tyree. "I haven’t won a class at Devon since 2011 when I was a junior. I won the older large stake that year, I think, so it’s been a long time. I went in the ring and Missy and John told me that I could do eight from three to four and I really didn’t believe them until I jumped jump three and I was like, ‘We’ve got to do it!’ He was amazing. He has the biggest stride and the biggest heart. He really just wants to please and do everything right. He was really great tonight. He’s definitely learned to go faster — he’s a little bit of a bigger horse. I really couldn’t be more proud of him.”

“I’ve had him for just over a year now," she said. "I got him right when he turned 8. We started in the 1.30m and we’ve worked our way up. He jumped a few 1.45m classes last summer, and we stepped him up to a few CSI2* grand prix events, he’s jumped a 1.50m — he’s been absolutely amazing. He won a CSI2* grand prix in Florida and the national grand prix in Tryon just a few weeks ago and now to win tonight is just amazing. He loved the atmosphere and it’s really nice to know that I can go in to something like this and he’s ready to perform. I haven’t shown in front of a big crowd like this with him before.”

“I like going early because I don’t get to watch so much, and I can just trust my plan and my horse," said Tyree. "Missy and John are great people to have on the ground. With my round, there isn’t really anything I would change — maybe a little quicker here or there but I thought overall he was great. Of course, going early, you watch everyone go after you, and it’s a faults-converted class so everyone’s going to go fast, and there are a lot of quick riders and horses. I was definitely a little bit anxious, I didn’t think I would win at the end but I’m obviously very pleased that I did.”

“Anytime I go in the ring, no matter what the format is, he’s always ready to go and game," she said. "He just wants to do a good job. If we make a mistake, chances are he’s not going to do it again. It’s been really great to work with him, and I have to thank Missy and John for all the work they’ve put in to him. It’s definitely been a little bit of a process, and I couldn’t do it without them. I want to go slow with him because I think he has a lot of potential. We’ll see where he ends up, but wherever that’s going to be I think he’s going to be a winner, as he’s already shown.”