Kristen Bumpus on Diadora wins the $25,000 Hunter Derby in her first trip to Devon 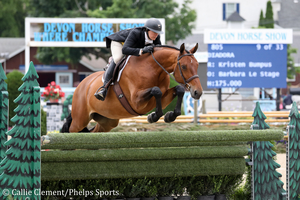 Kristen Bumpus and Diadora Kristen Bumpus, who fulfilled her lifelong dream of showing at the Devon Horse Show and County Fair, made her first trip to the Dixon Oval a memorable one by defeating fellow competitors to take home the top prize aboard Diadora with a total score of 372.

The pair impressed judges with their best efforts over two rounds of competition.

The classic round course designed by Paul Jewell, which featured a total of 12 obstacles, utilized the best of the Dixon Oval.

TWO PANELS of judges, Linda Arisani and Ralph Caristo with Keri Kampsen and Scott Fitton, carefully evaluated each and every competitor’s round, adding extra points for those who opted for the high option fences.

In the first round of competition, Bumpus and Barbara Le Stage’s Diadora scored a 172, taking all four high options.

Heading into the second round of competition with the top 12 scoring horses, Bumpus sat in the sixth position.

However, after hitting all of the marks in the handy round to score a 200, they soared to the top.

Diadora, an 11-year-old Dutch Warmblood, excels in the handy rounds, thanks to her large stride and incredible scope.

The mare, who was previously a 1.40m jumper in Europe, has been partnered with Bumpus since January., and they spent the winter circuit in Ocala, Fla., showing in the High Performance Hunters and various derbies.

“I know that Diadora is very handy and that’s our strong sui," said Bumpus. "So I knew that if I made into the handy I had a shot of moving up, but I had no idea I could move up this far. I don’t watch other people go because I don’t like to change my mind and second guess. I walk my plan and I have it in my head. The only reason that I will change is if she doesn’t land on the track that I want. My horse is different than everyone else’s so I don’t like to compare to others. If I don’t feel my plan happening then I will abort the plan and go on to plan B. I’m not a big watcher.”

“One of my customers owns Diadora and bought her a year and a half ago for her granddaughter," she said. "I got the ride in January when I got to Ocala. She was great in Ocala. She was circuit champion in the High Performance Hunters and second in two international derbies. She is pretty handy. Our goal is the International Hunter Derby Finals. That’s why I wanted to come here and have it be a little more similar to Kentucky in terms of the horses, track, and course designers. Diadora has a giant stride. She is also really scopey so I feel like I can crawl down to any height fence and she still jumps across. She used to be a jumper in Europe where she did 1.40m classes. She feels like she could jump a building from anywhere. It doesn’t matter where I put her, as long as it’s in range, and she can do anything. She has a great rhythm and flow too. She is a great mare. She is the best one I’ve ever had. She has a great attitude and always tries.”

FINISHING in second place was Jimmy Torano on California 19, ending on a total score of 362.5.

The 10-year-old German warmblood gelding was previously a jumper with Olympian Rodrigo Pessoa, but made a seamless switch to the hunter ring with Torano during the 2019 winter season in Wellington.

“This horse actually used to be a grand prix horse of Rodrigo," said Torano. "He was showing him in Europe and brought him to Florida to show in 2* and 3* grand prix classes. The horse is very careful, and it was a little bit over its head in the jumper ring. I asked Rodrigo at the end of circuit if we could try to make him a hunter. That was literally on a Tuesday and showed him the next day in the High Performance Hunters and he won both over fences classes. He’ll go to Upperville next to do the derby there. At this point, I’d like to do derby finals. He is not spooky and is dead quiet, even though he was a jumper. I can really count on him for the special events.”

“It was great today," said Torano. "Kristen kicked our butts today. The judges had it right, she won the class. I made a mistake on the second to last jump. There was a very difficult inside turn off of a large oxer. Kristen did that turn and we all had to do it after that. I had a hard rub at one of the jumps. My horse was really good today and was really good all week.”

Torano competes in both hunters and jumpers.

“This is my business and I really do like both," he said. "I like a good horse, I don’t care what division or discipline it’s in. I won a lot of grand prix last year, but I have to say one of the things I enjoyed the most last year was derby finals. That was an event, I didn’t win, but it was a real event. I enjoy that as much as winning any grand prix. It all comes down to riding a good horse and what they give you in the ring.”

Greg Crolick and  Carollo Z rounded out the top three after finishing on a total score of 360.

Continuing with the theme of Thursday’s top three, the 10-year-old Warmblood gelding also started his career as a jumper before transitioning to the hunter ring.

The pair championed during Week 10 of the Winter Equestrian Festival in the High Performance Working Hunters.