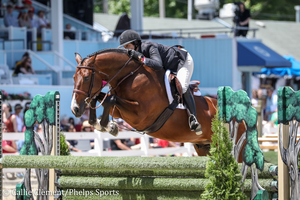 Amanda Steege and Lafitte de MuzeIn the first over fences class, Lafitte De Muze scored the class high score of 89, followed in second and third by Holly Orlando on Alright and Will Roberts on Who Dat with scores of 87 and 82, respectively.

“Lafitte De Muze is 8 years old," said Steege. "We imported him a little over a year ago. I showed him last year here in the Green 3’6” division, and he had the most beautiful round, but when everyone clapped, he got really scared and didn’t score as well. It was really nice to come back here a year later and see how much more mature the horse is. He handled the crowd beautifully.”

“DEVON IS always the highlight of my show year," said Steege. "My great-grandfather showed at Devon in 1912, and we have a photo of it. I’ve championed here at Devon three times now, and it’s so special with all of the history. The amount of spectators that come out to watch is amazing. There’s nothing like it anywhere else. It’s always high on my list of priorities to get here.”

While it may have been his first Devon blue, Lafitte De Muze is no stranger to the winner’s circle.

Previously, as a 7-year-old, Steege and the gelding won in the $50,000 WCHR Professional Challenge at the 2018 Capital Challenge Horse Show.

MEMORIAL DAY at Devon Horse concluded with Rebekah Robinson winning the championship in Single/Pair Pony Driving with her Saylor Wagon, owned by Mrs. Collin F. McNeil, after accumulating 13 points throughout the division. 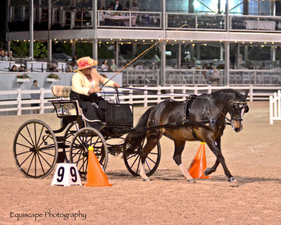 "He is a Welsh cross, 21 years old," said Robinson. "He and I have probably been doing this for the last eight years here. Each year, he loves it, and he gets better and better. He was awesome from the beginning. He loves the cones, he loves the scurry and the other classes he agrees to do. The crowd was really up tonight and that got him a little alert in the turnout. In the scurry, he was absolutely amazing. He turns on a dime!”

“I love Devon! I’m from here," she said, "I’m from this area. The farm I work for is from this area so this home. My family comes, my friends come, it’s awesome. I love the atmosphere. I think more people stayed to the end so it was nice to have a crowd.”

The reserve championship went to Lisa Koehler with her own Saylor Wagon with 12 points.

Earlier in the day, Richard O’Donnell was champion in the Horse Pairs division.

Jody Hess driving Linda Weinberg’s Back to Back Trap was reserve with 15 points.