DEVON, Pa--After a good finish on Sunday, Stephanie King of St. Augustine, Fla., on her Co-Starr won the $7,500 NAL/WIHS Adult Amateur Jumper Classic, to take the 2019 Adult Amateur Jumper championship with 25 points over Lexi Maounis and her Roos. with 15 points, at the Devon Horse Show and Country Fair. 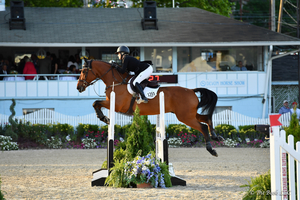 Stephanie King on Co-Starr (Photo by The Book LLC)King and the 12-year-old Belgian Warmblood gelding never touched a rail throughout all three classes of the division, beginning competition on Sunday with a second in the $2,500 Adult Amateur Jumper class.

The pair, who have been partnered together for four and a half years, on Monday were third in the speed class before winning the evening’s Classic to take the overall title in the Adult Amateur Jumper division.

Monday evening’s $7,500 NAL/WIHS Adult Amateur Jumper Classic had nine entries, out of 22, jump clear over the Guilherme Jorge-designed course to advance to the jump-off, but it was King who finished the jump-off course in 31.071 seconds for the win.

“THIS IS my second year coming to Devon," said King. "Last year was a little bit of a heartbreak because I had the last rail down in the first round of the classic, so to come back and be double-clear and win it is huge. He’s such an amazing horse. He loves the crowd, and he loves the energy. He feeds off of it so it’s fun to bring him here.”

“He’s a forever horse," said King of Co-Starr. "He’s not going anywhere. I didn’t really buy him with that intention, but it quickly became clear that that was how it was going to be. We trust each other, and we just fit really well together. He’s either saved my life or we’ve pulled off classes that I never dreamed of pulling off, including this one. He’s the sweetest horse. He thinks he’s a puppy dog, and he likes to cuddle. He’s a lover and he tries his heart out every single time we go in the ring. He’s just amazing.”

Reserve champions, Maounis and Roos, who were second in Monday’s speed class, finished second with a double-clear performance in 31.737 seconds, while Hannah Showell on Penn was third in 33.229 seconds.

After fracturing a rib in a fall off of Co-Starr at the end of the Winter Equestrian Festival just a few months ago, King, who also won the Adult Jumper championship at the Washington International Horse Show last October 2018, is back at the top of her game.

“I did fracture a rib at the very end of WEF," said King. "It was the first time I’ve fallen off of him since I’ve had him. This is a big moment for me because we’ve been working on coming back from that a little bit. My confidence got a little low so this is a big confidence booster.”

“It thought the courses were all fantastic and very fair," she said. "It worked really well to our strengths because he can have a very big open stride when we need it, but he’s also able to turn back nice and tight.”