DEVON, Pa.--The 52nd winner of the Carriage Pleasure Drive on Sunday, May 26 was John White of Newton, N.J., who won the Unicorns and Four-in-Hand horse class with his Heavy Dog Cart to qualify for the Championship Drive-Off. 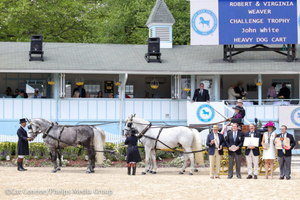 John White's four-in hand (Photo by Cat Connor)Crowds filled the stands to watch the immaculately turned out horses, carriages, whips and passengers parade around the Dixon Oval during the initial inspection.

Following that, competitors tackled a 4.5-mile drive through the picturesque neighborhoods of Devon, before returning to the showgrounds for the final judging.

“THE TWO in the front are Lipizzan horses from Hungary, and we’ve had them for about three months," said White. "The wheelers are Kladruber horses from the Czech Republic. They were OK but the leaders are really special.”

“The carriage is a dog cart, it’s on the heavy side as a dog cart, which is good for four big horses," said White. "It was made in Belgium in approximately 1880. The louvers are all real, which is where the dogs would go in, and the cart would take the dogs to a place in Hungary, and then they would be taken out to do the hunting, and they would be put back in to go home at the end.”

“It’s very nice to win at Devon," he said. "This has been a good event for me in the past. I’ve won this particular event before so it’s nice to win again.”

“The horses are Canadian crossbreds," said O'Donnell. "They’re Hackney and Clydes. We ride and drive them. I’ve had them for about 12 years. They’re about 15 years old right now. We do a lot of fox hunting with them as well as carriage driving, but carriage driving is predominantly what we do with them.”

“The carriage is a Philadelphia piece," said O'Donnell. "It was built in about 1888. We have records of when it was built, and who it was owned by originally. We are the fifth owner of the vehicle.”

“It means a lot to win at Devon," he said. "Devon is special. To get a blue at Devon is spectacular!”

“This is a 6-year-old Dutch Harness Percheron cross, and I had him bred from a stallion that I liked very much for excellent character," said Anndersen. "We got that, along with plenty of get up and go, and a good brain, so he’s the whole package. Of course, as a grey, he gets lighter and lighter each year and when he shed out this spring, I said, ‘Those dapples are going to Devon.’ He got the Devon dapples this year!”

“This cart it one that I especially love," she said. "Not only is it a smooth, great ride but my husband restored it. It’s an 1890 Kentucky Break Cart, and it is done right down to the most perfect detail of the pinstriping. The fact that my husband did it and I bred the horse, it’s just such a heartfelt effort and win. We couldn’t be happier.”

“It was so beautiful driving through town, and the people were so nice," said Andersen. "Everybody was waving and cheering. People were out there with cold water for us, it could not have been nicer. The lakes are beautiful and the houses are lovely. It was really a treat!”

“I showed about 20 years ago in the fall in the in-hand dressage classes, and it was a real honor to be in the top ribbons, but we never took home the blue ribbon at Devon, so this is a really great day," she said. "It just doesn’t get any better than this, does it? The footing is terrific. Last I was here, the barns had not been renovated. It is tremendous. It’s just lovely, every aspect of it. As crowded as it is, it feels like fun, not mayhem. It’s just fun and everyone turns out so well.”

CLAUDETTE YARBROUGH and her own Lyla won the Children's Jumper Championship with a total of 21 points. 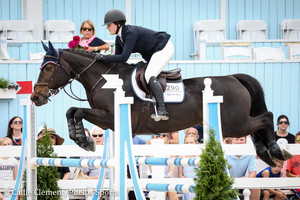 “I’ve had Lyla since December," said Yarbrough. "I showed her throughout Florida this year in the Children’s Jumpers. She has been so awesome. She is a little grumpy, she’s a mare. She is really fast though.”

“I just wanted to go in and go really fast," she said. "I planned to do all of the inside turns. My distances came up really nicely for me today. I think I made up time with my turn after fence three and then to the last jump I really ran for it. I train with Stacia Madden, and she told me to just do my best and go for it.”

“I showed here last year and it was really exciting. I’m excited to be back this year because I have a new horse and it’s just a really big honor to show here."

Reserve champion in the Children’s Jumper division was Grace Debney on Byolga.