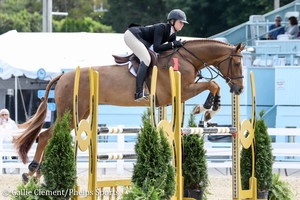 Paige Matthies and Conto BlueThe championship was awarded to the junior who accumulated the most points throughout the two days of equitation competition.

Matthies and her two equitation mounts, Conto Blue and Blurred Lines, dominated the equitation divisions throughout both days of competition. On Thursday, the first day of Devon, Matthies won Section A of the WIHS Equitation Classic – Jumper Phase, then she finished second in Section A of the Platinum Performance/USEF Show Jumping Talent Search 3*, and then had another second in the U.S. Hunter Seat Medal.

“We’ve been planning this for many years so I’ve always had a goal for this to happen," said Matthies. "I did four equitation classes for this. The first one I did was the Washington Jumper Phase which I won with an 89. That was my first class here so I was very happy to start this week off like that. My favorite was probably the USET Talent Search because I’ve always wanted to do well in that class here and the USET is a big deal to me, so I was very happy with that.”

“HIS NAME is Conto Blue and we call him Blue," said Matthies of the first of her two mounts. He is the sweetest horse I’ve ever been around on the ground and in the saddle. He always wants to please. I got him through Ken about two and a half years ago, and it’s really nice to have him perform as well as he did. I’ve had Blurred Lines for the same amount of time. I bought the two of them at the same time. He is 13 now so he’s been the one that I’ve sort of relied on for bigger classes like here, Finals, I did him in 3 of the 4 classes here.”

Matthies, who is enrolled in online school to help her maintain a competitive show and riding schedule, trains with Ken and Emily Smith as well as Melissa Hirt.

“I do online school," said Matthies. "I switched about five years ago for the purpose of being able to travel and ride. I just finished classes, I’ve signed to go to Auburn University in the fall and ride on their team. This summer, I will be showing at the Great Lakes Equestrian Festival in Michigan for all of July and then the first two weeks in August, and I will do North American Young Rider Championships and then finals in the fall.”

“We’ve been preparing for this Devon for a couple of years, said her trainer, Ken Smith. "We tried to get her here two years ago. but it didn’t work out. Last year we had a pretty good show, but a little inconsistent I’d say. We did end up winning the big jumper class, which was quite exciting. But for this year we really made a plan. She came to Kentucky last week and we really tried to be prepared as best we could. Melissa Hirt had the horses absolutely in perfect shape. Paige was in a really good place in her brain, rode very consistently and we couldn’t be happier. The horses were great. Like she said, the USET was really important. It’s a younger horse she did in that class and he has been a little bit green and over the year has really come through for us and he’s stepping up nicely so we’re very pleased with him.”

Matthies also competes in jumpers with her two mounts, Climbus and Dirkie Z.

In addition to the awarding of the R.W. “Ronnie” Mutch Challenge Trophy, the Dixon Oval also hosted the ASPCA Maclay Horsemanship class on Friday morning.

The class was split into three sections, and In Section A, Hallie Grimes on Boldly Stated placed first, while Isabelle Song on Casper Van’T Gestelhof won in Section B, and in Section C Tanner Korotkin and Zapfier placed first.