ALLENTOWN, Pa.--Riding a horse that she got as a feral, unbroken 2-year-old off a Craigslist ad for $500, Fylicia Barr of West Grove, Pa., won her first four-star victory at the Jersey Fresh International Three-Day Event in Allentown on Sunday, May 12. 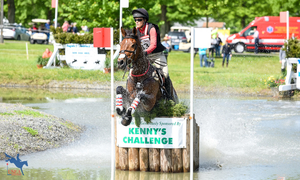 Fylicia Barr on Galloway Sunrise on cross country (Photo by USEA/Jessica Duffy Photo)It was cold, rainy, and windy, but even the bad weather couldn’t keep Barr and Galloway Sunrise, an American warmblood mare by Duty Officer out of Coco Chanel from the win, despite having one rail down in show jumping.

“She’s a horse that struggles with tension in the dressage and I’ve really been focusing more this winter on the dressage and show jumping phases,” Barr said. “She came out on Friday and just put down one of the best tests she’s put down. She was relaxed, she was supple. She had a little bobble in the second medium trot, but other than that kept going straight through and even with that score it still kept us up in the rankings.”

“I was worried about her fitness coming in to cross-country because I didn’t go south this winter,” Barr said. “I felt she was fit enough but I don’t have a lot of experience at the level so you don’t know for sure until you’re through the finish flags. I knew after the first jump – she was game on the whole time, hunting the flags. It’s just a really cool experience to have a horse who knows their job so clearly.”

“WE'VE AWAYS struggled with the show jumping, but my eye was in and she was just jumping out of her skin for me. I’m really pleased with her. Despite the weather she came in and put in an almost foot-perfect show jump round.”

“She was the first horse I did my first Preliminary on. I brought her up from the ground up – I was the first person to ever sit on her back. It’s been a long time coming and I feel like all the pieces finally came together this weekend,” Barr saidd. “It’s really exciting.”

Arden Wildasin from Connecticut on Il Vici climbed from 13th place after dressage to second place following their double clear cross-country round yesterday, and even a single rail today wasn’t enough to bump them out of second place.

“It’s been unbelievable,” Wildasin said. “Coming in today, that rail was unfortunately my fault – I have so much more to learn – I just didn’t have my balance together so I slid the reins, and he tried but it was just unfortunate, but he was amazing.”

Il Vici was the highest placed Thoroughbred in the CCI4*-L, and received the the TIP (Thoroughbred Incentive Program) award.

Meghan O’Donoghue from Illinois on Palm Crescent jumped all the way up the leaderboard from 14th after dressage to fourth following Saturday’s cross-country, finally finishing third place at the end of the weekend.

“He’s been jumping really well for me,” O’Donoghue said. “I was a little bummed to have the pole, but all in all it’s a long weekend so I’m not too upset and hopefully we’ll be better next time.”

With her eyes on Kentucky next spring, O’Donoghue said she plans to get the remaining qualifier she needs to compete either at Rebecca Farm over the summer or at Fair Hill in the fall.

BARR MAY have gotten kicked the first time she met “Sunny” as a feral, unbroken 2-year-old, but there was something about the mare’s fire that caught Barr’s eye.

“I’ve always been a fan of horses with a little fire in them,” Barr said.

Now, Barr is reaping the benefits of the patience and hard work it initially took to gain Sunny’s trust and respect.

“She’s knocked us down a few times, but we’ve always come back stronger,” Barr said. “She’s just got the biggest heart in the whole world. She has so much fire inside of her. She’s an absolute competitor and it’s really humbling to sit on a horse like that, that loves their job that much. It definitely wasn’t easy in the beginning, she made us work pretty hard for it, but I learned a lot from her and here we are now.”

“I knew I was sitting in fourth going into cross country, and she is usually pretty fast and clear across the cross-country – that’s usually where she shines – so I was hoping,” Barr said. “I came in, I looked at my watch, I saw we were clear and was just really happy to finish on our dressage score for the day.” 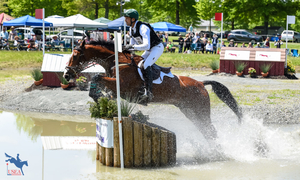 His other two rides, Don Dante and TKS Cooley, finished in seventh and eighth, respectively.

“I thought all three horses jumped really well," said Coleman. "This morning in the show jumping, Chris Barnard builds a great track and I couldn’t really ask them to jump any better – they were all in good form. And then the cross-country today, they went well. Off the Record is getting really experienced now at that level and he made really light work of it. It felt really good. We’re aiming him for Tattersalls in Ireland in a couple of weeks so he’ll be making the trip over there. I think he felt ready to do it so hopefully that will go well. The other two are greener – they’re very quality but this is only their second Advanced so I thought it was a good enough test without being too much. They both finished like four-star horses.”

In the CCI3*S, when overnight leaders Boyd Martin of Cochranville, Pa., on Luke 140 came in 13 seconds over the time, he left the door open for Dana Cooke of Mooresville, N.C., and FE Mississippi to win, if they could come home inside the time.

With only one second of leeway, it was up to Cooke to make the time over a course where only five of 55 riders came in under the optimum time.

“I wasn’t really planning to go for time,” Cooke said. “They were announcing right before we were going that if myself or Mia Farley made the time we could beat Boyd. I tried to ignore that because I didn’t want to make a stupid mistake, but actually my mare is better if I ride her forward and a little faster because I don’t have to pull.”

As Martin said after his winning dressage test on Luke 140, he had no intention of actively trying to make the time cross country.

His partnership with Luke 140 is still brand new, having only completed one Training and one Preliminary event before tackling the CCI3*-S at Jersey.

“I went out with the intention of just trying to get to know him a bit and give him a good ride around,” Martin said. “He was good – he’s everything you dream of in a horse. He’s a very sharp, scopey jumper; he’s got speed and agility; he’s nippy; and he’s a little bit too feisty, which I quite like in a horse . . . he could be a really really exciting horse for me in the future.”